We are a small but fine music publisher in Austria. Our publishing house offers you musical works from solo and ensemble literature to the symphonic wind orchestra. Music for the annual cycle. The traditional wind orchestra with flugelhorn and tenor horn is the focus of our range of sheet music. The music publishing house, founded in 1996, offers you a convenient way of sending the works in PDF.

All Pdf Download-scores in the shop of music publishing Hafner are set with professional music notation software and have an excellent print image.

Back to: Concert Band

Werfen is derived from the middle-aged word "werve" (vortex, whirlpool) and describes the place where the Salzach is "whirled" at the foot of the castle.
Duration: 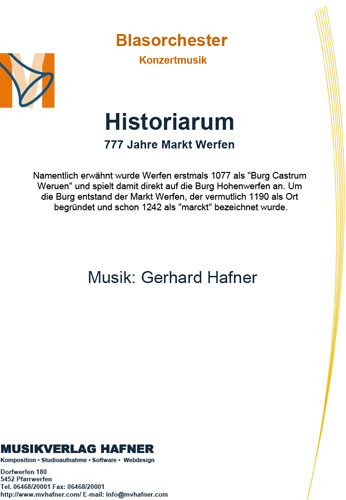 Salesprice with discount
Sales price 121,00 €
Ask a question about this product

Description Werfen is derived from the middle-aged word "werve" (vortex, whirlpool) and describes the place where the Salzach is "whirled" at the foot of the castle. Witch-hunt In the years between 1675 and 1690, Archbishop Max Gandolf of Kuenburg had over 150 people executed in the Archdiocese of Salzburg for alleged sorcery and sorcery. Protestants expulsion In 1731-32, a great Protestant law was passed. The Salzburg exiles were about 20,000 Protestant faith refugees from the Fürsterzbistum Salzburg, who had to leave their home because of an expulsion from 1731. Fights at Pass Lueg During the Napoleonic Wars the defending champion and landlord of the nearby Stegenwald Josef Struber defended the defense of the pass, because the Austrian military had not been able to hold him any longer. Coin treasure of Werfen In 1969, on the site of the Lichtenberghaus (market 20) the coin treasures of Werfen were found, about a thousand gold coins and silver coins buried in the early modern times.